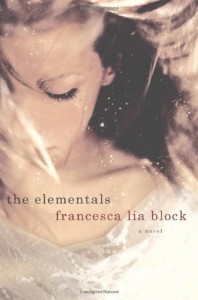 The Elementals has a dreamlike aura that prevents close scrutiny. It is as if the story is a spell that weaves its way around a reader and ensnares one to its illusory plot. The prose is poetic, and the story is hypnotic, almost detrimentally so. A reader finds oneself incapable of doing anything other than letting the story flow without any of the scrutiny that one might normally apply to a novel. This is a good thing because the writing is so powerful; one can do nothing but appreciate it.

It is only when a reader looks to resolve the many WTF moments within the novel wherein the story falls apart. For, when it is stripped down to its basic elements, the plot does not bear close examination. In fact, the plot is rather ridiculous. Ariel is weak when she should be strong and strong when she should be weak. John is very intense, making him fairly creepy in a stalker-like manner, and their relationship develops mostly off-screen so that a reader never becomes comfortable with it. The rest of the cast – John’s enigmatic roommates, Ariel’s unusually cruel dorm mates, and even the people she meets out on her searches for clues – are too extreme. Lastly, the story’s resolution is abrupt, as if Ms. Block had a word limit to which she was bound.

For all of the story’s faults though, of which there are many, it is difficult to forget the ethereal quality of The Elementals. Ms. Block’s evocative writing is brilliant, overshadowing many of the character flaws and lack of development. It haunts and intrigues a reader even after one decides the plot is ludicrous. The eerie tone of the story, as well as Ms. Block’s sensual phrasing, creates a memorable novel that one should view as one does a pointillist painting; it is better seen from afar, allowing the imagery and dialogue to waft over a reader’s senses, rather than up-close where the flaws quickly become apparent.
Tweet